Organisations rely on social relationships and interactions to achieve their objectives. Value added to the activities and economic outputs of an organisation by human relationships, partnerships and co-operation are, therefore, important. Internally, social capital takes the form of shared values, trust, communications and shared cultural norms, which enable people to work cohesively and thus enable the organisation to operate effectively. Externally, social structures help create a climate of consent, or a social licence to operate, in which trade and the wider functions of society are possible. Organisations also rely on wider socio-political structures to create a stable society in which to operate (such as government and public services, effective legal systems, trade unions and other organisations).

Sibanye is committed to the objectives and spirit of the Mining Charter. The Group understands that it takes more than compliance to earn its licence to operate. Its efforts and programmes are therefore aimed at making a lasting and meaningful difference in the communities in which it operates and from which its labour is drawn.

Sibanye holds new order mining rights for the Beatrix, Driefontein and Kloof operations which allow it to mine gold and associated minerals. The Group was required to submit SLPs as part of the documentation, detailing its compliance with the provisions of the Mining Charter. An account of its performance against the SLP targets developed for the period from 2012 was also submitted.

The SLP for the Beatrix Operation for the period 2012 to 2016 was approved in April 2013 and implementation is underway; SLPs for Driefontein and Kloof for the same time period have not yet been approved although they were both submitted in January 2012. Despite the delay in approval, the Gauteng office of the DMR subjected Driefontein to a compliance inspection on 20 September 2013. The inspection resulted in the issuing of a directive to rectify shortcomings that were identified during the audit. Areas of concern were related to transformation, qualitative aspects of SLP implementation, impact assessments, and alignment of housing programmes with local and national governments’ human settlements programmes. Corrective action was taken by various departments and a high-level team presented the report to the DMR on 15 November 2013. The DMR was satisfied with the presentation and reports submitted.

The Group engages with all its stakeholders in terms of the Sibanye Corporate Communications and Engagement Strategy, which has been developed to set out the principles and approach the Group follows in its internal and external communications and engagement in the short to medium term. This process reflects the Group’s corporate aims and objectives, and is critical to the development of key initiatives and projects to improve efficiencies and effectiveness. The strategy is evolving and is supplemented by regular departmental plans which set out individual communications plans in detail. 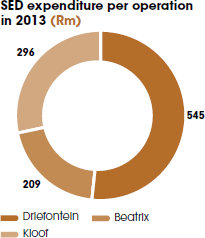 In 2013 Sibanye undertook an evaluation, of its activities and the effects on the community, and defined these under the banner of socio-economic development (SED), rather than the more-narrowly focused definition of corporate social investment (CSI). SED activity and expenditure relates to all projects that are:

Components of SED, include local economic development (LED) (including enterprise development, procurement and infrastructure development), education, training, conservation and the environment, as well as arts and culture.

LED is a significant component of SLPs. The Sustainable Development Department engages with local municipalities to ensure alignment of community development projects with Integrated Development Plans (IDPs). Sibanye undertakes LED projects for host communities in the vicinity of mining operations and others in labour-sending areas. Communities in rural areas of South Africa, while geographically removed from mining operations in Gauteng and the Free State, are important providers of labour to the Group.

The LED sections of the Group’s SLPs are currently being reviewed to ensure implementation success and greater levels of impact. Interim findings indicate that the projects that have been implemented to date, while aligned with the local municipalities’ IDPs and approved by the DMR, do not necessarily have the desired impacts on host and labour-sending areas. The lessons learned have prompted Sibanye to consider a different approach towards LED projects. To this end, the Group has decided to:

The magnitude of issues in communities interested in and affected by Sibanye’s activities is so large that LED projects alone cannot adequately address major community issues such as unemployment and poverty. The responsibility for finding solutions for these larger issues cannot reside with Sibanye alone, and will require co-operation between all stakeholders.

In light of recent developments in the industry, and increased community needs, Sibanye’s approach to LED and community development is under revision. Initially Sibanye will focus on identifying connections between the needs of the community and its own strategic imperatives. An example of this is the plan to construct critical infrastructure such as clinics and aligning efforts to eradicate TB with DoH community programmes. These are good examples of the kind of linkages that can be achieved.

For more information on all aspects of Sibanye’s social capital, refer to the Sibanye Sustainability Report 2013.