The word ‘Sibanye’ means ‘we are one’ in the isiXhosa language.

Sibanye owns and operates high quality gold operations in South Africa – consolidated into one Group with one vision and strategy. People are its most important asset and its workforce is skilled and experienced. The long-term success of Sibanye as a business and as a responsible corporate citizen is dependent on all stakeholders working together as one.

OVERVIEW OF THE ORGANISATION

Sibanye is an independent, South African domiciled and focused mining group, which currently owns and operates three underground and surface gold operations, namely the Driefontein Operation (Driefontein) and the Kloof Operation (Kloof) in the West Witwatersrand region and the Beatrix Operation (Beatrix) in the southern Free State. In addition to its mining activities, the Group owns and manages significant extraction and processing facilities at its operations, which beneficiate the gold bearing ore mined. 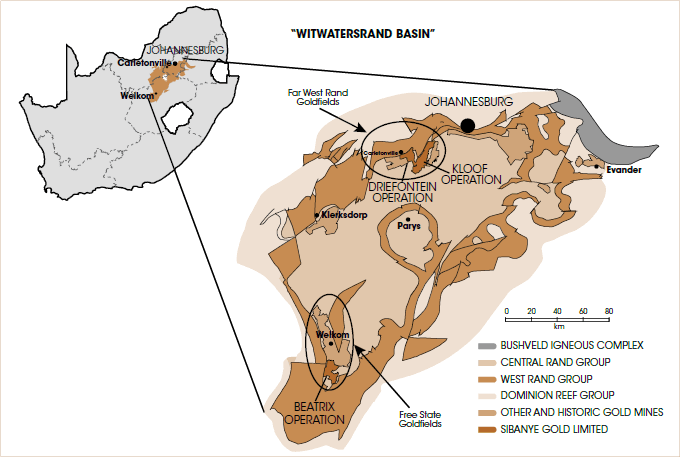 In 2013, the Group entered into an agreement with Gold One International Limited (Gold One) to acquire its West Witwatersrand Cooke underground and surface operations (Cooke) and made an offer to acquire 100% of Witwatersrand Consolidated Resources Limited (Wits Gold), a JSE and Toronto Stock Exchange (TSX) listed gold and uranium exploration company with significant gold resources in South Africa. These acquisitions will increase Sibanye’s annual gold production, enhance existing operational flexibility and provide Sibanye with the potential to significantly extend its operating life. 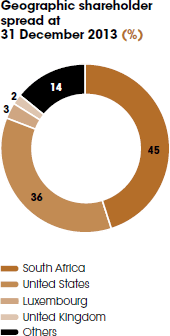 Sibanye is headquartered close to Westonaria, in the Gauteng province, near its West Wits operations. The Group’s primary listing is on the JSE, trading under the share code SGL, where it has been included as a member of the JSE’s Socially Responsible Investment (SRI) index in 2013. The Group also has a secondary listing of American Depositary Receipts (ADRs) on the New York Stock Exchange (NYSE) , which trade under the ticker code SBGL. Each ADR is equivalent to four ordinary shares.

The Group has a diverse shareholder base, which at 31 December 2013 predominantly comprised institutional investors located in South Africa (45%), the United States of America (36%), Luxembourg (3%), United Kingdom (2%) and others (14%).

The Group has a 100% free float and its three largest institutional shareholders (holding 34.8% of the Group) at 31 December 2013 were Allan Gray Proprietary Limited (14.7%), Investec Asset Management Holdings Proprietary Limited (14.2%) and Van Eck Associates Corporation (5.9%). The successful acquisition of the Cooke operations from Gold One will result in Gold One holding a 17% interest in Sibanye after the conclusion of the transaction.

Sibanye mines, extracts and processes gold ore to produce a beneficiated product, doré. The doré is then further refined at Rand Refinery Proprietary Limited (Rand Refinery) into gold bars with a purity of at least 99.5%, in accordance with the Good Delivery standards as determined by the London Bullion Market Association (LBMA). The refined gold is then sold on international markets. Sibanye holds a 33% interest in Rand Refinery, one of the largest global refiners of gold, and the largest in Africa. Rand Refinery markets gold to customers around the world.

Sibanye’s gold sales are predominantly in US dollars. Although this exposes the Group to transaction and translation exposure from fluctuations in foreign-currency exchange rates, Sibanye does not generally hedge this exposure. It may do so in specific circumstances, such as to protect cash flows at time of significant capital expenditure, for financing projects or to safeguard the viability of higher-cost operations.

Sibanye is committed to becoming a fully transformed South African mining Group and its approach is guided by the Broad Based Socio-economic Empowerment Charter for the South African Mining and Minerals Industry (Mining Charter). In 2004, Gold Fields Limited (Gold Fields) undertook a black economic empowerment (BEE) transaction, transferring an amount equivalent to 15% of its equity from Sibanye, formerly GFI Mining South Africa Proprietary Limited, to Mvelaphanda Gold Proprietary Limited (Mvelaphanda Gold). In 2010, 10% of equity was allocated to an Employee Share Ownership Plan (ESOP) and another 1% in an empowerment deal. At the end of 2013, 32,219 employees were participants in the ESOP.

Sibanye recognises that it has a diverse workforce. It is committed to meeting the targets required by the Mineral and Petroleum Resources Development Act, 2002 (Act No 28 of 2002) (MPRDA) and its associated Mining Charter, including the appointment of historically disadvantaged South Africans (HDSAs) in management positions and employing women in core mining positions in the Group. Sibanye has invested significantly in empowering HDSAs and women at all levels, particularly in leadership roles.

Pursuant to the separation of the Group from Gold Fields in February 2013, Sibanye is developing and finalising specific policies and procedures relating to its sustainability practices. These policies and practices will form an integral part of the management of the Group.

Sibanye is guided by the spirit of transformation as defined in the MPRDA and Mining Charter.

Strategic policy initiative guidance is also provided through the United Nations Global Compact (UNGC). This is a practical framework, which was launched in 2000 for companies committed to sustainability and responsible business practices. As a leadership initiative endorsed by chief executives, the UNGC seeks to align business operations and strategies everywhere with 10 universally accepted principles in the areas of human rights, labour, environment and anti-corruption.

All transactions relating to BEE, finalised under Gold Fields, are still applicable to Sibanye. In this regard, Sibanye transferred equity equivalent to 26% to BEE entities, constituting 15% Mvelaphanda Gold, 10% ESOP and 1% transformation shares.

Apart from the Safety, Health and Sustainable Development Committee where the Chief Executive Officer (CEO) is also a member, all the Board committees are composed exclusively of independent non-executive directors.