A perspective from the chair

‘Constructive dialogue between industry and labour must continue in the interests of sustainability and growth of the sector.’

I am extremely proud to report back to our stakeholders on a very successful period since the listing of Sibanye in February 2013. In our maiden year of operation as an independent company, Sibanye has delivered an operating and financial performance which has exceeded the expectations of many market observers.

The company has undergone radical change and it is heartening to see how the Sibanye workforce has embraced the new strategy and outlook for the Group. The enthusiasm and commitment to this new future is apparent in the relatively seamless manner in which the new operating model and organisational structures have been implemented. This is reflected in the first-rate operating results the Group has produced. Sibanye has achieved and, in many instances, exceeded the targets it set at the beginning of the year and delivered on a number of its longer-term goals earlier than expected. The fact that this has been achieved in a year of considerable change, against a backdrop of global economic uncertainty and a volatile labour environment in South Africa, is remarkable.

Importantly, these results have not been achieved at the expense of safety, which is a key priority for Sibanye. All of the safety indicators Sibanye measures continued to improve in 2013 and Sibanye will continue to strive towards its goal of zero harm.

The gold-mining industry experienced one of the most challenging years in over a decade in 2013. Indications of economic recovery in developed markets, most notably in the US in the early part of the year, and suggestions that the US Fed would begin tapering its quantitative easing programme, sparked significant liquidation of professional gold holdings in exchange traded funds (ETFs) and other more speculative gold investment vehicles. The impact on the gold price of this sudden and unprecedented liquidation of professional holdings was exacerbated by weak demand for gold at the time. The Indian government (India is historically the largest global consumer of gold), imposed import tariffs on gold, which significantly reduced demand from that market. While a total free fall was avoided due to increasing demand for bullion and jewellery in China as the price declined, this was insufficient to absorb the level of sales from professional holdings. As a result, over the course of 2013, the dollar gold price declined by approximately 27% from US$1,655/oz at 31 December 2012 to US$1,205/oz at 31 December 2013.

Sales of gold from professional holdings appear to have moderated in 2014 while the gold price has stabilised, supported by continued strength in bullion and jewellery demand, largely from China. The outlook, however, remains uncertain and the dollar price of gold will continue to be driven by a number of exogenous factors in 2014. The most probable scenario is one of continued price volatility within a defined trading range, most likely lower on average than that which prevailed in 2013.

In South Africa, the gold mining industry was shielded from the full impact of the lower dollar gold price by the weak rand, which depreciated by 20% relative to the US dollar during the year. As a result the average gold price received was flat year-on-year at approximately R435,000/kg. While this provided welcome relief for the South African gold producers, there remains a longer-term risk of increased inflationary cost pressures linked to the weaker currency. 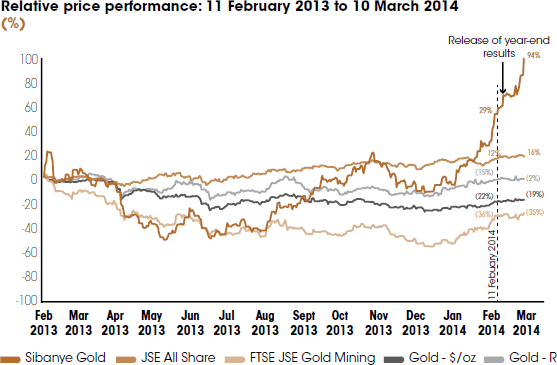 The positive currency effect aside, the South African gold industry has, however, had to contend with a number of country-specific issues, most notably the uncertain and volatile labour environment, which continues to pose a significant risk to the future sustainability of the industry.

The tragic events at Marikana in August 2012 resulted in the rapid rise to prominence of the Association of Mineworkers and Construction Union (AMCU) and a fundamental change to the organised labour dynamic in the South African mining industry. With the emergence of AMCU came the inter-union rivalry with the historically dominant National Union of Mineworkers (NUM), which fuelled uncertainty and complicated the biennial wage negotiations between the gold industry and the representative unions in 2013. The rivalry prolonged the negotiations for close to a year before they drew to an uneasy conclusion in March 2014. Fortunately operational disruptions during the wage-negotiation period were minimal and, while many issues remain unresolved, relative stability has returned to the sector.

It is clear that the South African mining sector has to adjust to working with multiple stakeholders going forward. The current hostile industrial-relations climate is not sustainable. This means that constructive dialogue between industry and labour must continue in the interests of the sustainability and growth of the sector.

It is also vital that all stakeholders, including government and affected communities, use the time between wage discussions to engage with industry – outside of and decoupled from emotive wage negotiations – to address other crucial issues of importance to the industry and all South Africans. These include, inter alia, issues such as the declining productivity and profitability of the industry and social issues related to the historic migrant-labour system, including employee indebtedness and living conditions in the communities close to our mines.

Sibanye is a proudly South African gold-mining company, and its future success is intimately associated with that of the broader South African economy. We are optimistic that, in an accommodative environment, this industry can prosper and continue to play an important role in the future of South Africa. The South African gold industry provides meaningful employment, is a critical consumer of goods and services that support a significant number of enterprises which supply the mining industry and, increasingly is being required to shoulder a greater socio-economic and developmental burden in the country.

In this regard, it has been pleasing to note the intervention of the Minister of Finance and the Department of Mineral Resources (DMR) in wage negotiations in 2013. It is also important to highlight the leadership role the Deputy President played in the establishment of the Peace Accord, which suggests that the South African government acknowledges the important role of the gold industry in our economy.

The industry and country require stability and certainty in order to attract capital investment necessary for development and long-term growth, which is essential if the industry is to sustain and create employment and assist government in addressing some of the broader socio-economic problems facing the country. A more cooperative and collaborative approach from all stakeholders will be crucial in achieving this.

The year 2014 marks the 10th anniversary of the promulgation of the South African Mineral and Petroleum Resources Development Act (MPRDA) – the legislation that defines and regulates the transformation of the South African mining industry. This anniversary brings with it a review of industry compliance with the transformational requirements of the Mining Charter. There is still significant uncertainty, which has not been adequately addressed by the recent amendments to the MPRDA, and Sibanye and the industry look forward to receiving further guidance from the DMR on how the sector should continue to grow and transform. From our side, we are optimistic that we have met all our obligations by ensuring that all our operations are properly empowered and our workforce and management sufficiently representative.

Other areas of concern include the continued inability of Eskom, the state power utility, to ensure consistent or sufficient power for the needs of the country. The gold-mining industry is an energy-intensive industry and sub-optimal power delivery is of grave concern to all operators of deep-level mines – not only because of the potential impact on the profitability and longer-term sustainability of the mines but also because of the significant risk that power outages pose to its employees. Sibanye is proactively exploring alternative sources of energy in order to mitigate the risk and reduce the demand load on Eskom.

As the Chief Executive Officer (CEO), Neal Froneman has stated publicly on many occasions, our employees are our most important asset, and Sibanye recognises the importance of its employees as key stakeholders in the business and their important role in ensuring its profitability and longevity. The Group embraced transformation as a business imperative. The Group has defined and adopted as its core values: commitment, accountability, respect and enabling (or a CARE) culture. Sibanye has begun to roll out the CARE model and will embed these values as part of a new, more holistic safety, health and wellness strategy in 2014. We expect this strategy to deliver further safety improvements in future as the Group works towards its goal of zero harm in the workplace.

I would like to congratulate Neal, his management team and their colleagues at Sibanye on achieving such stellar operating results and managing to convincingly and sustainably turn around operations that many industry commentators had written off. I am confident that Neal and his team will continue to build on the solid base of 2013 for the benefit of all stakeholders and develop Sibanye into a globally competitive and admired, proudly South African mining company.

Lastly, I am fortunate to have the support of a diverse and vastly experienced Board. While this Board has only been incorporated relatively recently, it has been pleasing to see the level of commitment, genuine interest in the business and valuable contribution that my fellow directors have already made. Following the listing, we welcomed Zola Skweyiya, Barry Davison, Nkosemntu Nika, Tim Cumming and Sue van der Merwe as independent non-executive directors of Sibanye. We expect that Chris Chadwick and Robert Chan, representing Gold One, will also join the Board once the acquisition of Cooke has been concluded. The mix of operational, technical, financial and commercial knowledge and experience is a distinct advantage for a young and dynamic company like Sibanye.

In the year ahead, we will continue to develop Sibanye into a model mining company. We believe Sibanye’s solid governance principles and operational expertise lay a solid foundation for this Group to deliver superior returns to shareholders, while holding significant attraction for a host of other stakeholders too.

Sibanye: We are one!